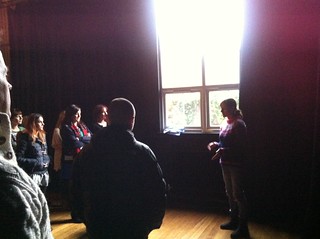 Next week, six months after an initial R&D supported by WalesLab, we return to the rehearsal room to begin a second phase of R&D on Light is like, this time at Pontardawe Arts Centre.

Its amazing how quickly it time has gone – the end of May seemed an age away when we first discussed it, but now its already upon us. The books have been read and the material digested. Ideas, which once shone brilliantly, now seem clichéd and dumb. This is the point where an R&D period finds its purpose; let me explain.

I am not a playwright; that’s not to say I don’t write words that are spoken on stage but I co-author those words, and the ideas behind them, with a group of people in a rehearsal room. It goes back to the idea that two heads are better than one, or the power of the crowd/ collective. By working in a way that gives (hopefully) equal prominence to others ideas, I’m acknowledging that I don’t have all the answers. I have lots of questions, and lots of gaps in my thinking. I will use the phrases “I’m not sure” and “I don’t know” a lot during next week, but these will be counterbalanced by the “I see” and “that’s great”.

As a theatre maker, rather than a playwright, I work in a space with people’s bodies, minds, eyes and voices. For me theatre making is a plural process, which can sometimes be frustrating for everyone, and one which I sometimes describe as floundering in the dark to find the light switch; it’s about looking for clarity and the most elegant way to express the idea. In science and design we understand what r&d is about – and structured processes have developed which are about the end goal. In the arts r&d should have the same focus; testing ideas and refining them for the audience. So we wont be doing a reading of a script, or performing a version of the play – we’ll be working with test audiences to try out the ideas, we refine them based on feedback and try again; research and development.

For more info on the project go to click here

We Made This gratefully acknowledge the support of Pontardawe Arts Centre, Creu Cymru and the Arts Council of Wales.