The design process for Light Waves Dark Skies, like the overall devising process, was in two distinct parts. First of all, there was a very open research and development period, where we worked with Gabriel García Márquez’s short story Light is Like Water. This was effectively a starting point for a series of experiments and investigations into a set of themes including light and water, and what they have in common, as well as how the childhood imagination intersects with scientific reality… or doesn’t! This is all rich territory for a designer and also a great chance for me to work with lighting designer Cis O’Boyle, along with the rest of our very creative team. Cis helped us to dig deep into what light is and how it behaves. And this had a big impact on our explorations of lighting and video projection. 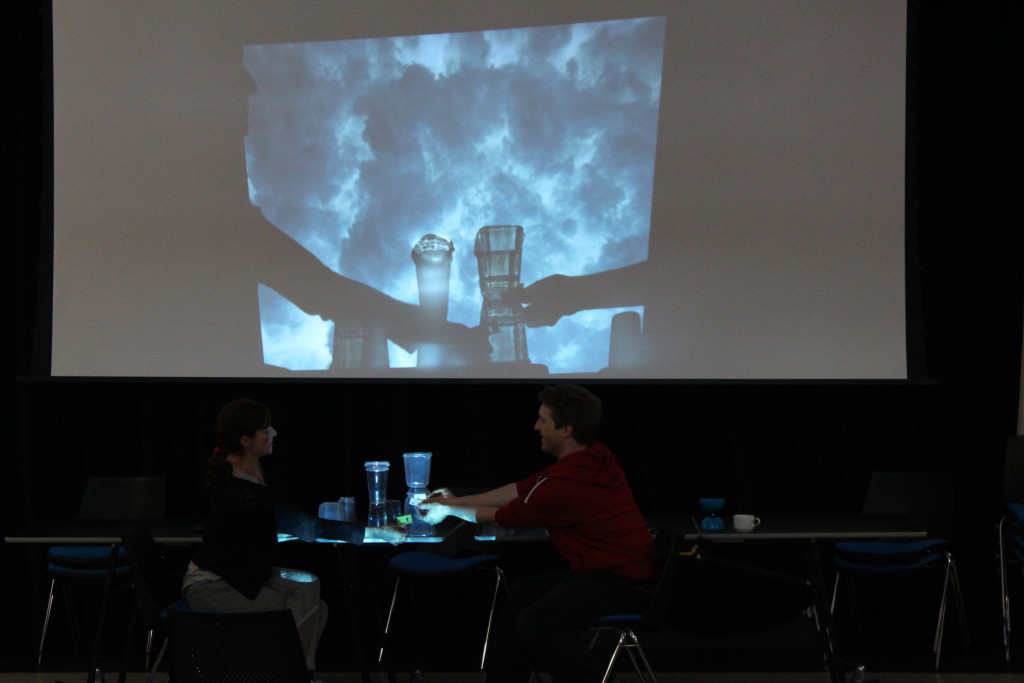 Video projections are in fact central to the design for Light Waves Dark Skies and, as shown in one of the pictures, they were part of our process from very early on. Projections are also especially interesting in terms of collaborating with a lighting designer as the line between our job descriptions gets blurred – something I very much welcome. I love collaboration and throughout my career as a designer I’ve always got the lighting designer involved as soon as possible. Unless one’s working out of doors, I don’t see how one can design for the stage without such a partnership. What’s more, Cis, like me, makes work of her own; both of us have practices that combine art and design. This was an opportunity to work both ways at once; on the one hand looking for visual solutions that help tell the story and support the performers; on the other, trying to make visual statements that say something in their own right.

Alongside the core team, members of the youth theatre Mess Up the Mess did a workshop with us and gave us feedback on our tryout performances; they had some wonderful visual ideas, which had a significant influence on how I thought about the design for the show.

The second part of the process was started by taking all the material we’d done so far and creating a script. This transformation was led by Matt Ball, the director, and Catherine Dyson, who is one of the performers and also a writer. At this point my job changed hugely. Previously, it had been expansive: opening up possibilities, testing new ideas, mixing things up and seeing where trails led. Now it was all about distilling those ideas and creating something specific, practical and in budget that would serve the script while still remaining true to the visions we’d shared as a team.

There were two particular challenges at this stage. Light Waves Dark Skies is going to be shown in two venues. While the actual areas for set and performance are not too dissimilar in size, they are very different in how they relate to the audience. The studio at Chapter Arts is a simple ‘black box’, in which audience and performance are effectively in the same room. The theatre at Pontardawe Arts Centre separates the audience doubly; with a raised stage and a proscenium arch. As well as creating a barrier, it also means that the sightlines are far more limited. Neither of these things is a problem – I rather like the ‘theatrical magic’ that can be created with a proscenium arch – but designing one set for both spaces needs some thought. And it certainly means that some of the more immersive ideas we’d had – such as containing the audience in an enclosed space within which we could achieve very specific lighting effects – will no longer be possible. On the other hand, it gives me license to explore some ideas which suggest wider landscapes and to let the projection take a more central role. A lot of this involved working with a scale model of the venues. I could have made a model of each but instead made one with the dimensions of both marked on it. You can see the latest version of the design here. It’s possibly the final version, though it’s still subject to costing and discussion with the builder. I’ve also included sketches I did that show the ideas from the R&D gradually involving into that final (probably) design. I like to work in a sketchbook but as Matt, is based in Cardiff and I’m in London, I scanned my drawings or made them digitally, or did a combination of the two. I then used a shared online folder as my ‘sketchbook’.

This leads me neatly to the second challenge. There’s a character in the script who, let’s just say for the sake of avoiding spoilers, appears as a video projection. That makes the projection design a lot more specific and precise than the abstractions and textures that I frequently use in my work. Something I’ve been developing over several shows, albeit in very different ways each time, is the use of real painting and drawing to generate material for projection. This felt appropriate to the project, with its themes of imagination and uncertainty, and built on what I’d done in the first part of the creative process. But somehow it had to coalesce into a believable character – or at least the impression of one. I’ve used video footage of a performer before; a dancer in fact, who interacted with the live performers. That was a collaboration with Vietnamese theatre company developed and performed in Hanoi, Cardiff and London, and it’s a whole other story for another time… It had much of the mysterious quality we are looking for, but was straightforward video footage of performer against a black background. So I’ve been experimenting with how to build on these experiences to create something that is right for Light Waves Dark Skies. As well as questions about the image itself, I’ve been thinking about the texture of the projection surface. At the moment, we’re experimenting with the feel of driftwood, and you can see that I’ve used Photoshop to add an image onto a scan of some wood. I’d love to know what you think about how this – and indeed the rest of the design – finally turns out!