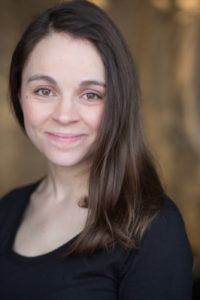 Who do you play?

The first show I saw was Roald Dahl’s The BFG at the Sherman Theatre. I remember being so amazed by it that I got the book out of the library and read it over and over and over again.

An Astronaut, a Zoo Keeper, a Farmer, a Pilot, an Author and a Jedi.

I started making up plays in the garden when I was about 6 using Mum’s old clothes as costumes and Dad’s ‘Queen’ album for the soundtrack. The rest of the actors were teddy bears and school friends. Apologies to everyone who had to watch these plays that apparently went on for hours!

I’ve just worked with an exciting company called Raucous on a show called Ice Road. It was set in the middle of the devastating Siege of Leningrad in 1942.

Getting to share our story with all the lovely people who come to see us.