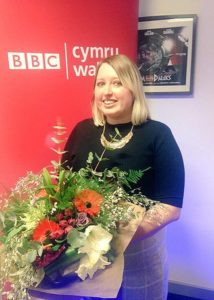 What do you do?

I remember my Dad took me to see the Snow Princess at The Queens Theatre In Hornchurch- I won tickets in the Dagenham Post. It snowed on stage and was absolutely magical!

I wanted to be an archaeologist or Madonna I became full time freelance in 2013.

I did the last year of my degree in Swansea, then moved to Cardiff and got involved with NTW TEAM. That started it all for me and made me see a career in theatre was possible. I wanted to be performer first but only because i didn’t think i was allowed to be a writer.

I’m currently on the EWG at The Bush Theatre in London and doing a second draft of my play for a reading in March. I’ve also been very lucky to get a bit of money from ACW to set a Queer Arts Collective in Wales.

Showing a new version of a classic that doesn’t rely on stereotypes and is empowering for young people… Also, i hear there might be WelshCakes?!!